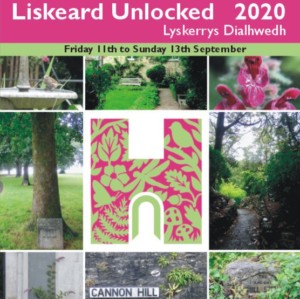 These online tours and photo shows are part of Liskeard Unlocked Heritage weekend. Due to social distancing we had to do things a bit differently this year and found ways for you to find out about the hidden parts of our town safely without having to leave home!

Take a tour through some of the beautiful houses and gardens of Liskeard, sit alongside the driver of the Looe Valley Line, peek inside the signal box at Liskeard station and join our Facilities team in winding the Guildhall Clock. You can also find out about the history of the Looe Valley Line with rail explorers Geoff Marshall and Vicki Pipe.

You can now also watch the online talks about the wool industry and Stuart House which took place over the weekend, you will find these at the bottom of the page.

A photographic tour of this great historic house and garden, home to two former Mayors of Liskeard. The house has amazing stained glass windows, beautiful carved wood and interesting gardens too.

A photographic tour of this beautiful garden throughout the seasons. With thanks to owner Amanda Deegan.

A photographic tour of this house, designed by prominent local architect Henry Rice and completed in 1855.

Narrated by Brian Oldham of Liskeard Old Cornwall Society, photos by Carmen Hunt, Brian Oldham and Mandy Hancock. With thanks to owners David and Wendy Pearce.

A driver’s eye view of the Looe Valley Line courtesy of GWR travelling from Liskeard to Looe and back again, narrated by Rod Sheaff

A tour of the signal box at Liskeard Station, which was built in 1915, courtesy of Network Rail

During the recent coronavirus lockdown the clock on Liskeard’s Guildhall was stopped – watching this video will make it clear that winding the clock is a two man job and there is no space for social distancing!

Join members of the Town Council facilities team as they re-start the clock again, restoring a sense of normalcy to the town.

Apart from a period in 1954 when it was removed for refurbishment, this was only the second time in its 152 year history that the clock stopped working.

Join rail explorers Geoff Marshall and Vicki Pipe (a.k.a. All The Stations) as they discover the history of the Looe Valley Line in this four-part mini series. Courtesy  of Devon and Cornwall Rail Partnership

As part of the virtual Liskeard Unlocked we held a couple of online Zoom talks which can now be viewed below.

Brian Oldham of Liskeard Old Cornwall Society talks about the history of the wool industry in Cornwall and the Blamey & Morcom wool factory at Lamellion in Liskeard.

A talk by Rachel Bennett about Stuart House in Liskeard. Stuart House is a unique late medieval town house, significantly altered in the seventeenth century, with a fascinating architectural, political and human history.

In the summer of 2019  Small Barn Studios as part of the Liskeard Unlocked Heritage Open days produced a  film and recorded a Promenade Play performed by the Wham Bam Dram Club.

The play focused on the 1872 Children Miners Strike that took part in the town.

The short film  gives a glimpse of the lives of Victorian children working in local mines juxtaposed against the lives of the modern day children performing the promenade play and taking part in the Global School Strike for Climate Change that was happening in 2019.

Many of today’s children their lives and experiences compared to 1872 are very different but there are parallels in children’s activism.

The footage was shot around the town of Liskeard and at Minions.

The film has been shortlisted for the Cornwall Film Festival 2020.