We’re thrilled to announce that this year the festival will take place over THREE DAYS – including a feast day on Friday 5th July, a day of dressing up, entertainment and fun on Heritage Day, Saturday 6th July, and a sports and activities day on Sunday 7th.

The feast day follows the tradition of the hanging of the Mayor: you all know the story – that Nicolas Bowyer, Mayor of Bodmin was hanged in 1549 for his part in the Prayer Book Rebellion. But did you know, far from being afraid before his execution, the unwitting mayor threw a feast?
There will be ‘an hospitable entertainment’ aplenty on Friday 5th July 2019 (but without the threat of an execution!)

Other plans include a day of sports and activities on Sunday the 7th July, an idea rooted in the 1700’s when the main focus of the festival was sporting pursuits, including Cornish wrestling, horse racing at Halgavor, and the tradition of the Guildsmen ‘beating the bounds’. 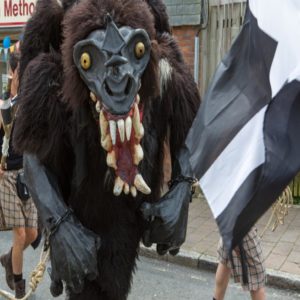