Meet us as we travel to a small town somewhere in the UK. Follow the stories of two groups of school and college students as they become wrapped up in their lives.

‘It Snows’ by Bryony Lavery and Frantic Assembly.
A tragicomic movement bonanza.
Same old story. Boy doesn’t meet Girl. Girl doesn’t meet Boy. Threatened by terrifying Lads Gang. Threatened by awe-inspiring Girls Gang. Mum and Dad have declared war… against each other. Weird neighbour in the building opposite. Usual ordinary gloominess. Then, one day, it snows. Everything changes.

‘DNA’ by Dennis Kelly.
A tragedy with hilarious moments, DNA is one of the most successful of the plays written for The National Theatre’s Connections project. Featuring waffles, dentistry, the truth about Bonobo’s sex life and all you need to know about fat, balding postmen, ‘DNA’ was written by one of the UK other leading playwrights!.
Some teenagers do something bad, really bad, then panic and cover the whole thing up. But when they find that the cover-up unites them and brings harmony to their once fractious lives, where’s the incentive to put things right? 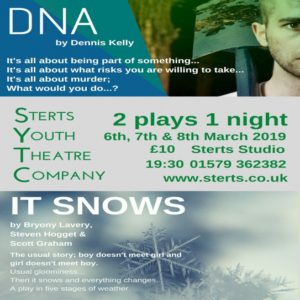