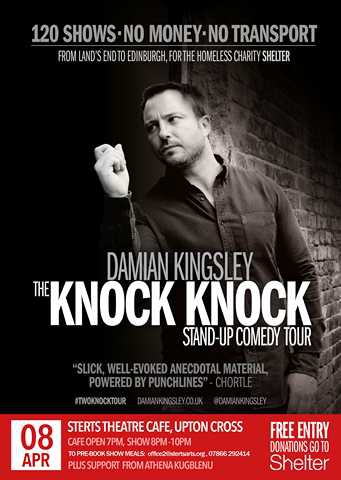 Stand-up comic Damian Kingsley is set to travel penniless from Lands End to Edinburgh on a 120 gig tour to raise money for the homeless charity Shelter. Shows are free entry with a voluntary donation to Shelter at the end. He won’t be able to use any money or public transport so he’s hoping to be given shelter, food and maybe a few lifts on the road to Edinburgh – in return he’ll tell jokes to anyone anywhere, from the Nags Head to Granny’s front room, for the basic necessities so many people have to do without every day.

You can support the tour by coming to a show, donating online, spreading the word, hosting a show or even giving Damian something he needs for the journey, like food or jokes. The aim of the tour is to raise at least £7,000 by 29 August. The tour starts on 24 March 2016 and finishes at the Edinburgh fringe in August, where all donations will also go to Shelter.