Triple Bill- Baroque Theatre  will be performed on Weds 19th July at 7.30 pm

Membership of the local amateur dramatic society has dwindled to four and the audiences aren’t much bigger. If they don’t come up with some rent money soon, they’re going to be thrown out. Time for dramatic action. “There’s only one thing that sells tickets these days” argues the Chairwoman. “Sex!” But how will the locals react to the promise of a sizzling sex comedy? All is revealed in this hilarious play and thus begins the chaotic build-up to an evening of extraordinary home-grown drama – an evening the locals would never forget! 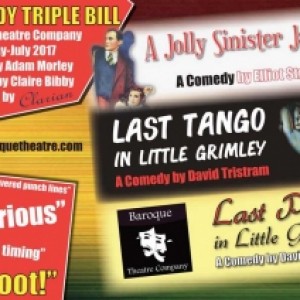