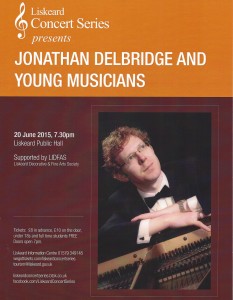 Jonathan is well known for his exciting and varied concert programmes. He has performed at venues throughout the UK including the Royal Albert Hall, York Minster and Norwich Cathedral.  He has been teaching piano in South East Cornwall for over 12 years and many pupils have gone on to study music further at music college or university.  As well as including piano music from Jonathan this concert will also feature performances from current pupils and those who have gone on to study music further and pursue a career in music.