Circus Around and About 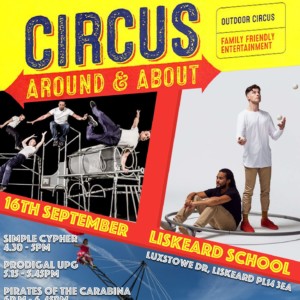 Performances are outdoors and will provide family friendly entertainment

Simple Cypher – Roll Up, Roll Up:
Prepare to be amazed by Roll Up, Roll Up as Simple Cypher perform explosive tricks with effortless agility within a large, spinning steel ring known as a Cyr Wheel. This skilled duo combines freestyle hip hop and acrobatics with juggling in an innovative and original way in this playful production.

Prodigal UPG – Zoo Humans:
A response to the shocking fact that over a third of young people in the UK spend less time outdoors than its prisoners, ZOO HUMANS sees The UPG Team bring their distinctive performance-parkour and Attenborough’s smooth narrative to a group of humans on the verge of forgetting how to move. As they slowly become aware of the artificial world in which they’re living, they must decide if they’ll swap touch-screens for human contact and risk the comfort of their cage for the lure of the great outdoors.

Further information and tickets at www.carntocove.co.uk/event