Grasp the Nettle will be performed at Sterts Theatre on Feb 8th at 7.30 pm

Dame Ethel Smyth, the composer, writer and suffragette, was the living embodiment of the passion with which Victorian women challenged the “male machine”. As an activist, she was imprisoned in Holloway with Mrs Pankhurst. This feisty lady was not only a talented composer but also a political activist.

She played an important part in the suffragette movement and was jailed for smashing the windows of an important politician. As a composer, she wrote the anthem for the suffrage movement The March of the Women as well as composing 6 operas and many sonata’s, quartets and song cycles. 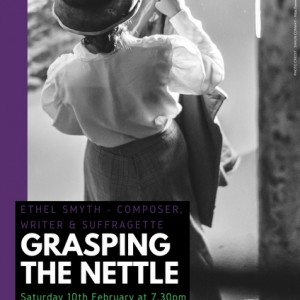