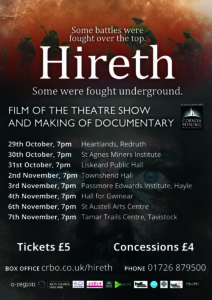 A new play by Edward Rowe, directed by Simon Harvey – the theatre show was filmed and this is a screening of the recording plus a making of documentary.

1914. West Cornwall. Harry Elton is starting a new life below the ground mining for tin.
Across the channel, a Great war rages.

When the British Army arrive with an unexpected offer, Harry and his friends swap the dirty, dark and dangerous tunnels of Geevor for the deadly underground warzone beneath the Western front.

‘You battle everyday with nature. You fight to drag minerals from the ground. You’re already fighters. You’re already warriors. Its time for you to lend those skills to the war effort’.

This epic new production tells the untold story of Cornwall’s forgotten war heroes and the unique impact they had on the First World War.

Featuring music from Seth Lakeman, a cast of professional actors and a community chorus, HIRETH marks the centenary of the end of World War 1 in St Justs’ Grade 2 listed Miners Chapel.