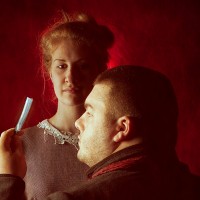 Unanimously acclaimed by the critics as one of Stephen Sondheim’s most powerful scores, this black comedy concerns the infamous homicidal career of Sweeney, the unjustly exiled barber who returns to 19th century London seeking revenge against the lecherous judge who coveted his young wife and falsely imprisoned him. Cheated of his revenge against the Judge, Sweeney’s thirst for blood soon expands to include his unfortunate customers, and – with the aid of his razor – he exacts a far more terrible revenge, cheerfully helped by Mrs. Lovett, who is delighted to give new life to her flavourless meat pies!

This production features a cast who are all under 25 and the directing team that brought you the 2013 smash hit, les Miserables.